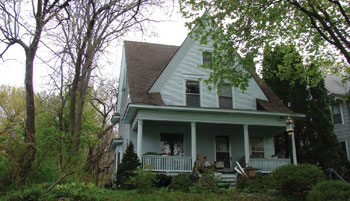 Anna Olsson was a Swedish-American author whose works were largely published during the first half of the 20th century. Her publications covered the period from 1903, when she was 27 years old, to 1941, just five years before her death. She was proficient in both the Swedish and English languages and was published in both. In Sweden, she is as well known as Mark Twain and Harriet Beecher Stowe for her children’s books. Her most popular book was En Prärieunges fenderingar, which was printed in America as Child of the Prairie. There were five different printings of this book, the last one in Sweden in 1984, 38 years after Anna Olsson’s death.

Anna Olsson emigrated from Värmland, Sweden in 1869, when she was just three years old. Her parents located first in Kansas. Eventually the family relocated to Rock Island, where Anna’s father, Olof Olsson was a professor at Augustana College and Theological Seminary, and eventually served as president of the institution during the 1890s. Anna Olsson was the second woman to graduate from Augustana College, receiving her Bachelor of Arts degree in 1888. When Anna was 21, her mother died, leaving her to care for her father and three younger siblings. It was not until after the death of her father in 1900 that Anna actively pursued her writing and publishing career. She was a popular contributor to Swedish and Lutheran periodicals and was published through the Augustana Book Concern, among others. Many of the documents referenced in the landmark nomination were translated from the original Swedish.

The Anna Olsson house was built in late 1900. From the time it was built until 1964, Anna and her three siblings, Maria, Lydia and Johannes, occupied the home. None of the Olsson children ever married, and Johannes, the youngest Olsson, was the last to occupy the house, leaving it when he was in his eighties.

The Olsson House is an unusual residence in Rock Island due to its simplified Shingle style architecture, which is rare in this area. It also has a very unique roofline, which has a shingled eave that juts out at a steep angle from the walls. There is no other roofline like it in Rock Island. The architectural integrity of the building is outstanding, having changed very little since 1900.