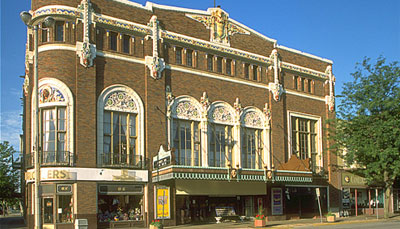 Designed by the Rock Island firm of Cervin & Horn and the Chicago firm of Brawn & Ermling in 1919 and 1920, the Fort Armstrong Theatre is a three story Art Deco style building faced with Indian red brick and polychrome terra cotta. The terra cotta was designed specifically for the theater by Rudolph Sandberg and produced by the Midland Terra Cotta Company of Chicago.

The major focal points of the Fort Theatre exterior are the 3rd Avenue facade with its curved northeast corner, the typanum-like areas above each window and the themed terra cotta designs. The terra cotta decorations include Illinois thematic symbols such as an Indian chief, spears and arrows, birds, snakes, corn and more. The main color of the terra cotta frame is ivory, with yellow, bright blue, green and brick red being used for details. The original marquee was replicated in 2001.

The main auditorium originally had a seating capacity of 1,566, with five sections of seats and four aisles. The stage area consists of a proscenium arch and a 22-foot deep stage. Ornamentation on the arch reflects the exterior of the building, incorporating spiral columns, symbols relating to Native American motifs and three large Indian heads at the extremities of the arch.

Fort Armstrong Theatre opened on January 19, 1921 at the height of the silent movie era. Opening night featured the film “Midsummer Madness” by William DeMille, a ten piece orchestra, as well as other musical and comedic presentations. Lila Lee, co-star of “Midsummer Madness” appeared in person. Much excitement was generated when congratulatory telegrams arrived from Paramount Pictures President Adolf Zukor, Cecil B. DeMille, and comedian Roscoe “Fatty” Arbuckle. On opening night the cost of adult admissions was 36 cents, plus four cents was tax. Children’s admissions were 20 cents.

The original owners were Rosenfield, Hopp and Company. Today the theatre is home to Circa ’21 a performance and dinner theater that has been in existence at this location since 1977.