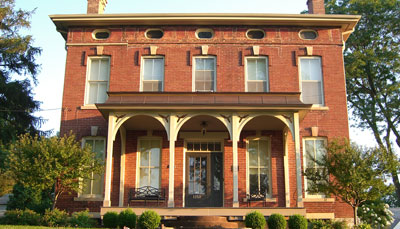 A long list of prominent citizens has resided in this magnificent Italianate home high on a hill looking over the Mississippi River valley. The original owner, O.J. Dimick, built it in 1872 at a cost of $8,000, using 145,000 bricks made at the spot where Rock Island High School now stands. Dimick was in the horse racing business and invested heavily in real estate. His family life turned tragic in 1878 when two of his children, five-year old Eddie and nine-year old Josie, died in the home on the same day from diphtheria. The children were buried in nearby Chippiannock Cemetery, and according to local legend, their Newfoundland dog stayed by the children’s gravesites each day until his own death. In honor of the dog’s devotion, the family placed a life-
size statue of the dog next to the children’s gravesite to guard it forever.

About 1885, Dimick sold the house to Thomas Sharp Silvis, who was the Rock Island County Sheriff. It is believed the city of Silvis was named after Silvis’ son, Richard S. Silvis. For a brief time, the family rented the house to Union Mission, a predecessor of Bethany Home, for $30 each month to serve as an orphanage.

From 1910 to 1920, Mr. and Mrs. Christian Frederick Gaetjer lived in the house. Gaetjer was named the city’s first park commissioner in 1908, having just overseen the construction of Long View Park. His last project was Lincoln Park; the park board reluctantly accepted his resignation in 1925.

From 1920 to 1924, McCabe’s Department Store manager Henry Sudlow and family resided here. During the 1940’s Earl and Ruth Aubrey were the owners. Mr. Aubrey was manager of the Como Hotel and his wife was County Republican Chairwoman.

Italianate features present in the home are the long, hooded windows with keystones, kneehole windows and hipped roof.