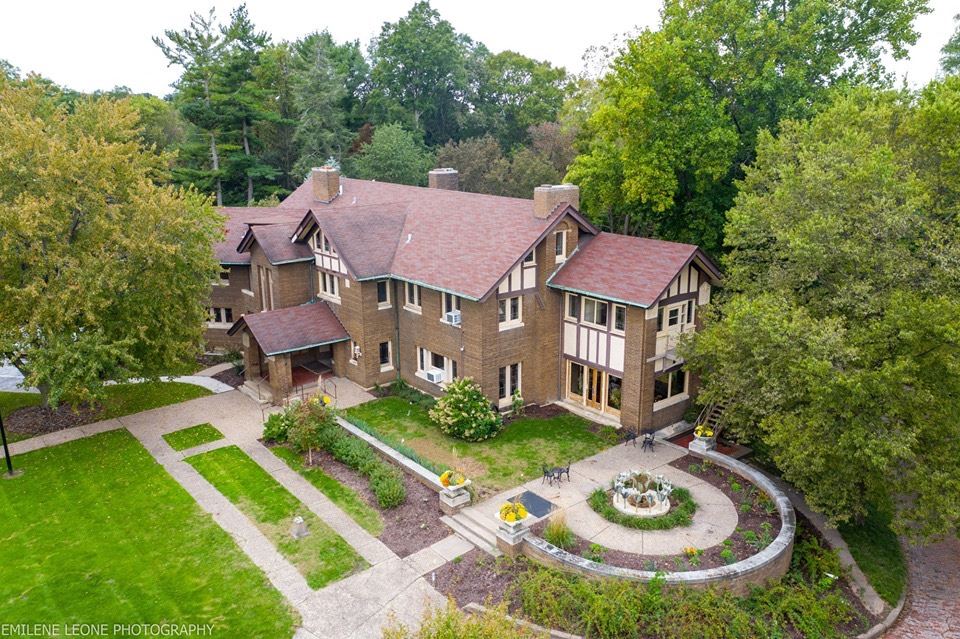 The siting of this house is splendid – it wraps around a curving hillside on a very disciplined but irregular plan. This Prairie style masterpiece is the work of Chicago architect Robert C. Spencer, a contemporary of Frank Lloyd Wright. Spencer was known for blending the “modern” Prairie style with historical elements, particularly half-timbering. Mrs. Hauberg’s favorite flower - the tulip - is featured stylistically throughout the exterior and interior. Spencer adapted the tulip to stone insets, plaster molding, wood organ screens, fixtures, decorative tiles and much more.

Landscape architect Jens Jensen, also from Chicago and very famous in his own right, laid out the ten acre tract to appear as a native Wisconsin woodland. Some elements of Jensen’s landscape remain on the west side of the house, particularly a winding path and stone bridge.

In 1911, Susanne Denkmann married John Hauberg in the "Tulip Room". They became leaders of civic philanthropy. Heiress Susanne was the youngest daughter of Frederick Denkmann, founding partner in the Weyerhaeuser - Denkmann lumber empire. Susanne’s own civic accomplishments included establishment of the West End Settlement, the Rock Island Y.W.C.A., children’s camps, and, with her siblings, donation of the Denkmann Memorial Library at Augustana College. John Hauberg was instrumental in securing Black Hawk’s Watch Tower as a state park in 1927. Much of his personal collection helped create the John Hauberg Indian Museum. One of his lasting legacies was as the recorder of the oral histories of the area’s pioneers, housed at the Rock Island County Historical Society Library.

The Hauberg’s children donated this architectural masterpiece to the City of Rock Island to be used as Hauberg Center in 1956.