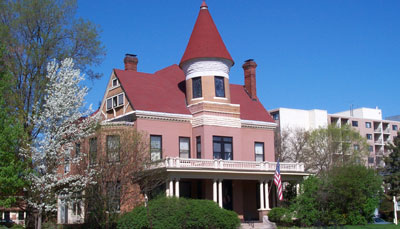 It is believed to have been built around 1870 for pork-packing industrialist Homer Lowrey, and predates most local examples of the Queen Anne style by five to ten years. In addition, it is constructed of brick, which was rarely used for Queen Anne style residential architecture in this community. The home was remodeled extensively in 1906 for the wedding of liquor wholesaler Peter Fries’ daughter. It was later owned by the Connor family, but has been owned by the Parker family since 1944.

This house combines Italianate style with elements of Queen Anne. A three-story conical tower, stylized shingles, symmetrical fenestration, bays, four varied porches and stone sills and lintels characterize this mansion. The full facade front porch, part of the 1906 modernization, has plain columns with Ionic capitals atop brick piers in pairs and triplets. The upper porch balustrade was restored in the 1990s. On the 7th Avenue side of the property is one of the best examples of residential stained glass in the city. The window features semi-circular stained glass panel atop a large square beveled glass sash. It contains 99 faceted jewels in its asymmetrical floral design.

The large rear wing was added in 1906. This is when the uncommon brick carriage house at the rear of the property was also constructed.