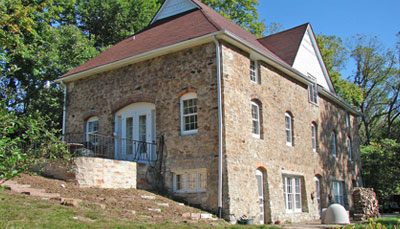 South Rock Island Township records indicate this barn was built at least as early as 1904. However, the construction methods and materials hint at earlier dates. Because of its location in a rural area and subsequent subdivisions of land, the early history of this parcel is hard to determine. Reportedly the limestone came from the Milan quarry.

What is known is that when gangster John Looney built his Bel Air residence in 1905 on the bluff of the Rock River, just across today's River Heights Road, this nearby barn became part of his property holdings. Looney supposedly connected the barn to his home via a 100 foot tunnel, which was used for a getaway in support of Looney's illegal activities.

One owner of the home was told by Judge John Cunningham that, when he was a child, he and other kids would sneak to this remote area to "spy" on John Looney. One time Cunningham and his cohorts uncovered boxes of dynamite beneath hay in the barn.

After Looney was incarcerated in 1925, the barn and the Bel Air house were sold. The immediate vicinity was eventually purchased by developer Benjamin Harris. The barn was purchased by interior designer and artist Hazel Evans in the 1940s. She converted the barn to two apartments, with a living space for herself on the first floor. In the 1960s, she sold the home to the John Patton family.

The two story barn has rough limestone walls filled with mortar. The hipped roof has gabled dormers covered with shingles. Arched brick headers were put into place over the six over six double hung windows. The wagon entrance was retained, but enclosed with doors and wood walls.