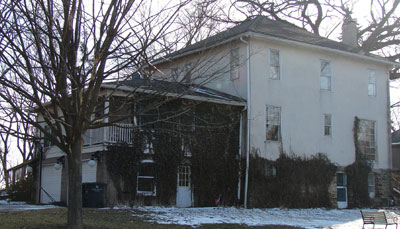 Bel Air, on the bluffs above the Rock River, was gangster John Looney's second home in Rock Island. He built the house in 1905 as a getaway retreat for himself and his gang of thugs. This remote home was far removed from the rest of Rock Island. There was an attack at this home in 1908 that John Looney attributed to W.W. Wilmerton. Looney was seriously injured in the attack, and he and Wilmerton would go on to have a gun battle in broad daylight in downtown Rock Island. You can read all about the Wilmerton skirmishes in the John Looney Legend Tour brochure, created by the Rock Island Preservation Commission. However, a synopsis of gangster John Looney and his exploits follows.

John Looney ran prostitution, gambling, guns, stolen cars and illegal liquor in Rock Island for most of the first quarter of the 20th century. His exploits were infamous during the pre-Prohibition era and, after briefly retreating to the Southwest, he reemerged even more vicious and murderous in the 1920s. Looney came to Rock Island in 1885 and eventually studied law and was admitted to the bar in 1889. He was a family man, with two daughters, who were respectable, and a son who followed him into crime. While his wife was alive, he lived at 1635 20th Street in Highland Park Historic District. By 1905, he secured his influence through violence and with his newspaper, The Rock Island News, which was the epitome of yellow journalism. Looney routinely used lies and slander in his newspaper to blackmail community leaders.

The most outrageous crimes began around 1909 with printing press explosions and street gun battles with W.W. Wilmerton. By 1912, the notorious Looney printed a scandalous article which placed Rock Island’s Mayor Schriver in saloons and brothels. With the publication of this story, Schriver had the police round up Looney and delivered him to city hall, where the mayor beat Looney so severely he required an extended stay at St. Anthony’s Hospital. The following day, Looney followers organized a supposed political rally for Harry McCaskrin, a lawyer and Rock Island News writer running for state’s attorney. As it turned out, McCaskrin’s fiery speech became a personal attack on Mayor Schriver, and two nights of rioting broke out in downtown Rock Island. Two innocent bystanders were slain, eight people shot, and dozens others wounded. The sheriff, panicked by the extent of the riot, phoned Illinois Governor Charles Deneen, who immediately declared martial law and called out 600 National Guardsmen. The militia remained in Rock Island for nearly 30 days, until after the election. In the aftermath of the riot, Looney temporarily retreated to a ranch he owned in New Mexico. However, he returned to Rock Island in 1917 and quickly regained control of all his former illegal operations.

But while Looney had been away, others formed their own gangs. Rival groups, headed by many of Looney’s former associates, had tasted power and money. Sharing any of it with Looney caused resentment, jealously and eventual defiance. Former lieutenants Anthony Billburg, George Holsapple, Dan Drost and George Buckley were frustrated with Looney’s management of local vice and wanted a bigger piece of the action. On October 6, 1922, they waited outside the Sherman Hotel in downtown Rock Island to ambush him. When Looney got out of his car and saw Billburg’s black Maxwell parked across the street, he shouted to the others with him to run, while he ducked behind his car. Young Connor Looney, who had developed his own reputation as an unpredictable gangster with excellent aim, drew a gun and turned to face Billburg’s men. The ambush was only partially successful, and Connor Looney died.

What eventually brought Looney down were a paper trail, a murder and the relentless, furious editorials of The Rock Island Argus. Saloonkeeper Bill Gabel had long been paying Looney protection money but balked at increased fees. Gabel and Looney ultimately worked out a payment deal, but Gabel paid with checks instead of the customary cash. When Gabel decided to hand evidence of these checks over to federal investigators, word of his betrayal got back to Looney. Gabel met agents at the Como Hotel on the night of July 31, 1922. Later that evening he was waylaid in front of his tavern and slain. Several months later, Looney fled Rock Island to avoid prosecution for Gabel’s murder. One year later, he was apprehended in New Mexico, tried, convicted and sentenced to 14 years at the State Penitentiary at Joliet. There was no direct evidence that tied Looney to Gabel’s murder, only the testimony of Looney’s gang members, who traded Looney for leniency.

John Looney was nearly 70 years old when he was released after nine years in prison. He retreated again to the Southwest, and died in 1942 of a lung infection in McAllen, Texas.

The house has thick limestone walls and was three stories high when Looney lived here. There were three tiers of south-side porches. Supposedly, the Bel Air estate had a tunnel that ran approximately 100 feet north to Looney's stone barn. The Bel Air basement floor has a slab of concrete where the tunnel entrance was once located.

The current house is very different from the Looney home at the turn of the 20th century. Looney lost ownership of the home in the 1920s, after he was sent to prison. Daughter Ursula filed documents in court to try to keep Looney's southern Rock Island holdings, but was unsuccessful. The third floor is gone and the porches have been removed, plus there are two new additions on the house. The back of the house, which faces River Heights Road, is now the actual address. The original driveway from Black Hawk Road is long gone. The missing third floor, which was a ballroom, is where most of the illegal activity allegedly took place.