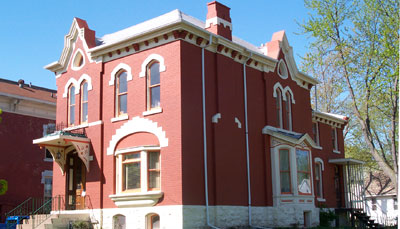 Oscar Barnhart, who lived here with his family for less than ten years, was a newspaperman and part owner of the Rock Island Union newspaper. He later established the Union Printing Company downtown.

Built in 1875, this house shows an uncommon Mediterranean influence. Note the oriel window with a radiating arch, the three-pointed attic window, and the unusual gable shape. Originally there was curved, leaded glass in the front arch that extended over the oriel. The points are further emphasized in the window hoods, including the glass shape. The north side bay window is also elaborate and includes a broken pediment above the middle window. The heavy, incised brackets and iron cresting are also noteworthy on the front entrance. The basement of this home is unusually high for houses in Rock Island.