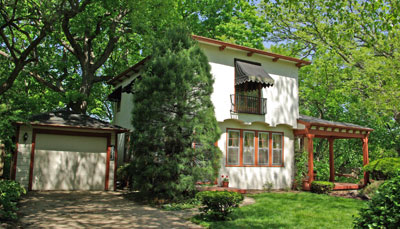 
Spanish Colonial Revival architecture is rare in the city and with so many fine details in a smaller-scaled home.

This Spanish-influenced house, which was identified as 4558 12th Avenue until 1931, was built in 1929 for Peter Reuben Anderson and his wife, Alice R. It has had many owners over the years, and has even been rented a few times.

Mr. Anderson was a grocer and later a contractor, who built the house next door for his sister, Geneva, as a rental property. He and Alice lived in this stucco home for eight years, then rented it out from 1937 until 1939 before selling it to Oscar E. Thorne and his wife, Ruth N. The Thorne lived here for over two decades.


Spanish Revival homes are common in the American southwest, but unusual in Rock Island. Especially evocative of the Spanish influence are the textured stucco walls, wide wooden brackets beneath the eaves and decorative iron grillework railing in front of the second story casement doors. The half-porch with its sloping shed roof and plain wood supports suggests a design for a warmer climate.