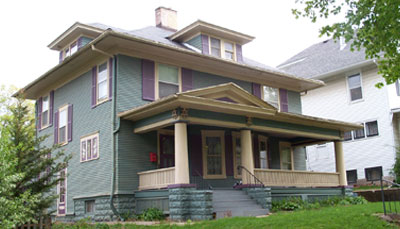 This Colonial Revival style house was built in 1905 for Helen and Wesley P. Ammermann, secretary and advertising manager for L.S. McCabe Company. During his business career, he was head of circulation for The Moline Dispatch, advertising manager at Petersen’s department store and manager of the Chute Company in Davenport. Wesley, brother of the first mayor of East Moline, Walter Ammermann, lived here until 1920. By 1925, the Benjamin and Annette Harris family moved into the home. Harris started as a wholesale grocer and liquor distributor, but later greatly diversified business interests. He built a wholesale tobacco plant at 23rd Street and 3rd Avenue, purchased the Illinois Theater in 1924, and by 1946 announced plans to construct 162 homes in the vicinity of 30th Street and 42nd Avenue in Rock Island – which he did.

While mainly Colonial Revival, the house has interesting nods to Queen Anne and Arts & Crafts styles. The three window rounded bay inside the porch is a Queen Anne feature, but the porch trim is purely Arts & Crafts. The house has bellcast dormers and roof, and full height porch columns with an unusually large diameter. Also note the beveled oval front door window, the leaded oriel window on the south side, and the triple stairway window on the north side of the residence.