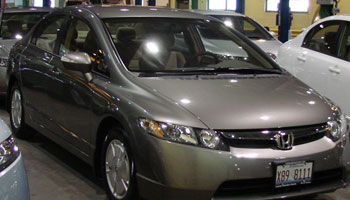 Saving Gas & Energy as a City

The City of Rock Island went green in January 2008 and purchased 24 new, fuel-efficient hybrid vehicles including:

About the Green Rewards Program

Rock Island is the first Illinois community to use the fleet purchase provision of the Green Rewards program. The program offered $1,000 rebates to Illinois residents and communities who finance hybrid or other fuel-efficient vehicles at participating Illinois lenders. The rebates offset the higher, upfront cost of hybrids and reward buyers for reducing carbon emissions and gas consumption.

The Honda hybrids cost $23,235 each, which is significantly higher than comparable gas-fueled cars. But with the state’s $1,000 rebate, a federal tax rebate, and other deal discounts, the City paid $18,765 per vehicle.

Projected Impact of the City's Hybrids

The vehicles replaced those used by the public works, fire, and community and economic development departments and police detectives.