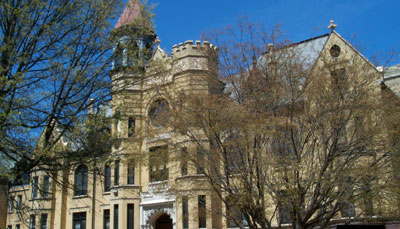 Demolished; De-Listed as a Rock Island Landmark (1994) and delisted from the National Register Historic District (2005) after the 2005 fire.


This unique, magnificent estate in the heart of Rock Island is one of the most beautiful Gothic Revival treasures in the Quad Cities. Sadly, two-thirds of the historic buildings, including the convent portion in the west wing and the center wing that contained the library and chapel, were destroyed by fire on July 14, 2005. The remains of the buildings were razed in 2008 to make way for a new Rock Island-Milan School District #41 elementary school called the Rock Island Center for Math & Science.


The Villa de Chantal is designed in the Late Gothic Revival style, reminiscent of European cathedrals. The original west wing featured a rough brick foundation with a light buff brick upper portion. The roof was gray slate. Two crenellated towers, portions of which still exist after the fire, framed the entrance to the main building, with an octagonal belfry atop one. This belfry, with its red slate roof and gothic-shaped openings, housed the convent bell the Sisters of the Visitation originally brought from Kentucky. The main entrance is made of white glazed terra cotta, and largely survived the fire. The front facade originally contained many different window styles, including a round rose window, leaded chapel windows, gothic outlined and tracery windows and simple multi-paned casements. The east wing, known as Lewis Hall, is similar to, but much less ornate than the original west and central wings. The Chaplain’s Bungalow shows Prairie style influences. A concession to the Gothic style of the rest of the Villa is the shape of the side openings on the porch.

The Sisters of the Visitation came to Rock Island from Maysville, Kentucky, and operated a school on 5th Avenue near Sacred Heart Church. Two years later they decided to build a larger school and convent on what was known as Ball’s Bluff at the edge of Highland Park. The first building, designed by George Stauduhar, was completed in 1901 and became the convent portion of the complex. A few years later a more elaborate building, which became the center portion and also of Stauduhar design, was built. This contained the chapel, classrooms and dormitories. In 1919, Stauduhar designed the Chaplain’s Bungalow, located to the east. In 1929, architect Edward Lerch designed the third portion of the building, the east wing, containing mostly classrooms. The designed landscape was created in 1907-08 by Alling Stephen De Forest of Rochester, New York.

Originally operated as a boarding school, the Villa also had many day students. The last high school class graduated in 1975.