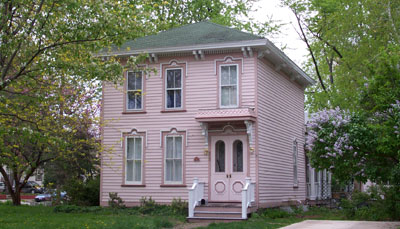 
Sometimes life wasn’t always about work and making money to build a grand Broadway home. Housing developer, speculator and attorney Mansfield Sturgeon was also a shortstop. In 1866, Sturgeon, Phil Mitchell and William Dart formed the city’s first baseball team, the Wapellos. Their home field was Bailey Davenport’s pasture at 17th Street and 10th Avenue. In the very first game, the Wapellos defeated Davenport by a score of 118 to 27; Sturgeon accumulated 15 runs. The team lasted just four years, but the popularity of baseball in Rock Island exploded at the time Sturgeon built this house in 1876.


In 1890, the home was sold to the Bahnsen family. German immigrant Frank Bahnsen was the vice president of Hartz & Bahnsen Drug Company, located in an imposing, four-story building at 20th Street and 3rd Avenue.


This small home is considered “Cottage Italianate” because of the size and scale of its Italianate massing and details. The low-pitched roof has widely overhanging eaves with decorative paired brackets underneath. The tall, narrow, two over two windows are decoratively framed. Side and back porches on the house feature simple supports with decorative brackets. The double front exterior doors are reproductions, while the originals remain in place inside the vestibule.