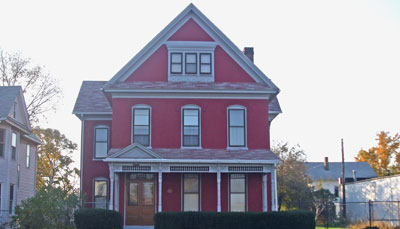 
This brick Italianate house was constructed in 1867-71 for Balthazar Streckfus, a German immigrant whose son, John, founded a very successful excursion steamship line. Thirteen-year-old John and his older brothers Henry and Mike built the house for their parents. Balthazar operated a wagon shop at 9th Street and 3rd Avenue, and the trip from Edgington was just too much on a daily basis.


The Streckfus family became a name synonymous with riverboat excursions. In 1884, John left the grocer business he had with his brother and purchased a steamboat that operated between Andalusia and Rock Island. In four short years, he added a second double-decker steamer, which made runs between Clinton and Rock Island. Later, John built the first steamer designed exclusively for pleasure excursions in the United States. The J.S. was a palatial 175-feet long, with four decks and a crew of 45. By the 1920s, the Streckfus family relocated to St. Louis, where John built his largest steamers, The President and The Admiral. Famous jazz musicians plied the river on the Streckfus steamers between New Orleans and St. Paul.


The original Italianate form of the house is much disguised by the Eastlake porch and the steep gable roof, both of which were added in the 1890s. The porch is one of the most ornate in the city, with its chamfered columns and decorative millwork.