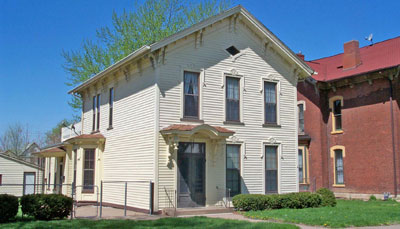 
Built about 1870, the Speidel House is an example of the front gable Italianate style, which dominated for several years in Rock Island. However, this version is constructed of wood and not brick. Note the extremely tall, narrow, elaborately hooded windows, which are characteristic of Italianate homes. In the Speidel House, the first floor windows nearly touch ground level. The details above the doors and windows, as well as beneath the overhangs are prominent in the Italianate style. The double front door, paired roof brackets and three-window bay complete the nod to the Italianate period.


Long-term ownership by a single family may have contributed to such a high level of architectural integrity. Conrad and Margareta Speidel and their descendants lived in this house from 1870 to 1940. After Conrad’s death in 1914, daughter Thekla is listed as the owner; Margareta had died in 1899 and brother Ernest in 1892. Thekla died in 1950, but the home had been turned into apartments about ten years earlier. Many Broadway homes were converted to apartments beginning in the 1940s.


Speidel was an early pioneer of Rock Island, known to be in the apothecary business by 1845. City directories promoted his personal entrepreneurship: “Conrad Speidel, established in 1858, practical druggist and apothecary and dealer in drugs, medicines, perfumery, toilet and fancy goods and medicinal wines and liquors.” His earliest Rock Island operation was likely with Erich Clacius on Otter Street, between Illinois and Orleans, which today we would know as the Old Chicago Addition on 12th Street, between 2nd and 3rd Avenues. Speidel was also secretary-treasurer of the German-language Volks-Zeitung newspaper.