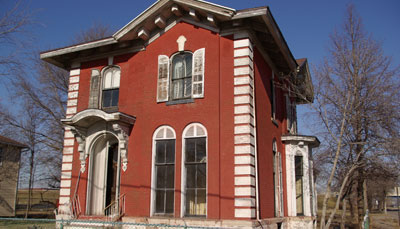 
Isaac Heinsfurter, a downtown clothier who lived here for 20 years, built the home. However, the home’s most famous occupant is Harry M. Schriver, a former Rock Island mayor. Schriver lived in the house from 1905 until his death in 1959. He willed the house to his housekeeper, Frances Bock.

In 1911, Assistant State’s Attorney Harry Schriver was elected to his first term as mayor of Rock Island. He served as mayor from 1911 to 1915 and again from 1919 to 1923. Schriver had the misfortune of being mayor during the heyday of gangster John Looney. Frequently Looney would use his popular scandal sheet The Rock Island News, which had a circulation of 10,000 at its height, to blackmail and destroy the reputations of his critics. The notorious Looney had printed a scandalous article whose headline screamed “Schriver’s Shame! Spent Night and Day in Peoria in Filthy Debauch with Ethel: Deeds that Would Shame a Dog!” With the publication of this story Mayor Schriver had all 18 newsboys arrested and their papers confiscated. The police found Looney and delivered him to the mayor’s office, where Schriver beat Looney so severely he required an extended stay at St. Anthony’s hospital.

Two nights of rioting in downtown Rock Island followed, with passions heated by Looney supporters. Two innocent bystanders were slain, eight people shot and dozens others wounded. The sheriff, panicked by the extent of the riot, phoned Illinois Governor Charles Deneen, who immediately declared martial law and called out 600 National Guardsmen. The militia remained in Rock Island for nearly 30 days.

Looney temporarily retreated from Rock Island, but returned in 1917, and the gangster’s control over the city became almost complete. His henchmen included the police chief, the city attorney and even his old enemy, former Mayor Harry Schriver. In 1922, Mayor Schriver was indicted on gambling and protection charges, but he was ultimately successful in defending himself and retaining his ability to practice law.