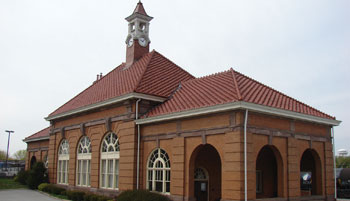 
Only depot of the famed Rock Island Lines, or any other railway, still existing in Rock Island.

This Depot and CRI&P Railroad

The former Chicago, Rock Island & Pacific Railway Passenger Station represents the remnants of the first terminal built west of Chicago, which made Rock Island a pivotal location for the movement of people, commodities and raw materials. In 1845, civic leaders began to plan for the construction of a railway to Rock Island. Completing the first bridge over the Mississippi River, The Rock Island Lines sped the westward expansion of the United States.

This magnificent building was erected in 1901 by the Rock Island Lines Railroad to serve as the third Rock Island passenger depot. For many years, this depot was a hub of activity, with as many as 32 arrivals and departures daily, and 21 ticket agents working around the clock.

Charles S. Frost of Frost & Granger, Architects, of Chicago, designed the station. Frost was the most prolific railroad-station architect in the country, and was responsible for about 200 large and small stations for Chicago & North Western, Milwaukee Railroad, Great Northern and Rock Island railroads. The depot was constructed by Rock Island building contractor John Volk at a cost of about $75,000.

As passenger trains gave way to air and highway travel, train depots became obsolete. The last scheduled passenger train left this station on May 31, 1978, and the depot was closed "permanently" in April of 1980. At the request of the City of Rock Island, the deteriorating depot was listed on the National Register of Historic Places in 1982.

Efforts to revive the classic structure failed until 1994, when the City of Rock Island purchased the property from the Iowa Interstate Railroad. The City restored the exterior in 1996, and replaced the clock tower. The entrance was returned to the southeast corner of the building. Adjacent to the depot was a deteriorated freight house, built with the same types of bricks and roof tiles as had been used on the depot. When it was demolished in 1997, its bricks and tiles were salvaged and used as necessary for replacements on the depot renovation.

In 1999, the City sold the property to Abbey Station LLC, which now operates this former depot as an elegant brunch and banquet facility.