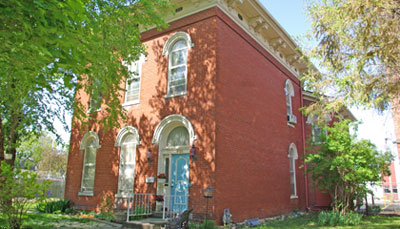 Early Years of the Peetz Family

John Peetz emigrated from Bavaria in 1828 and settled in St. Louis, where he had a wife and child who died. Five years later he moved to Rock Island. In 1855, he was married to Miss Johanna Sommer. The couple had 11 children, with two boys and one girl dying young. When the Civil War broke out, John enlisted in the infantry and fought in the battles at Fort Donelson, Shiloh, and Corinth, and was promoted to Captain before he came home. In 1867, he was elected as Rock Island County Sheriff and was a member of the German Old Settlers Association, serving as president for a number of years.

In 1868, John built a large brick home for his family at 628 18th Street. Nellie, the youngest surviving child, was born in that house in 1879, and grew up there with her parents, two brothers and five sisters, including Clara, Lucy, Josephine and Sara.

John was hired as a cashier at the Peoples National Bank when it opened in 1874. After the death of bank founder and president, Bailey Davenport, in 1890, John was chosen to take over Davenport’s role as bank president for one year. He then served as an administrator for Davenport’s substantial estate.

The Next Generation of Peetz Family Members

Johanna Peetz, passed away on March 9, 1883. John died of Bright’s disease on March 18, 1894. That year, Nellie and Sara Peetz began keeping a scrapbook of Rock Island’s history, which included an engraved invitation for the dedication of the soldier’s monument in 1869; an invitation to a military ball in 1879; the election of President McKinley in 1896 and his assassination in 1901.

Nellie worked as an office girl at Deere & Mansur, which later became part of Deere & Company. Even in the summer of 1901, when they suffered a record high of 106 degrees in July, she dressed properly in long, black skirts with at least three petticoats underneath, a long-sleeved shirt with starched collar and cuffs, an ascot tie, heavy stockings, and patent leather shoes. In 1948, Nellie was interviewed by the Rock Island Argus, which printed a number of columns about her cherished scrapbooks. She and her 92-year-old sister, Sara, still lived together in the brick house at 628 18th Street. By that date, the only remaining family member was their sister Lucy, who was married and living in Washington, D.C. Their brother Julius, a Weyerhaeuser executive in Tacoma, Washington, had recently died.

The integrity is outstanding in this house, probably because it was owned by the same family for more than 80 years. The narrow windows and paired brackets beneath the eave exemplify the Italianate style. There is an early gable roofed addition on the back, with matching brick and window hoods. The front door has replaced what likely were narrow double doors.