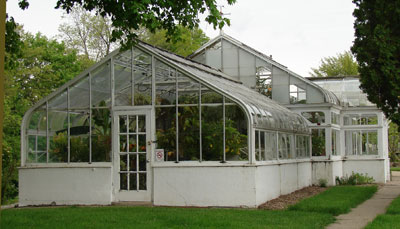 Significance Statement
Only public conservatory in the city.

In November of 1936, there were 65 men working on Works Progress Administration (WPA) projects in the city of Rock Island. In the summers, the number would reach as high as 125. The WPA was the largest New Deal agency created by President Franklin Delano Roosevelt to lift the country out of the Great Depression. Across the country, many public buildings were constructed as a result of the program, and Rock Island was no different. The largest WPA project involved the National Guard Armory, but lesser projects were included as well. The Long View Park Shelter and Garage building and the Conservatory were such examples.

Conservatory and Nearby Buildings

The Shelter and Garage building was constructed first, and then the greenhouse was built just south of the shelter. The proposed conservatory was described in The Argus on December 31, 1936, as a building of glass walls and roofs to be built in three sections. The center would be a palm house measuring 22 feet by 22 feet and 5 inches with a roof 22 feet high. On either side would be greenhouses 15 feet high measuring 18 by 25 feet.

The Conservatory has changed little from the time of its construction.