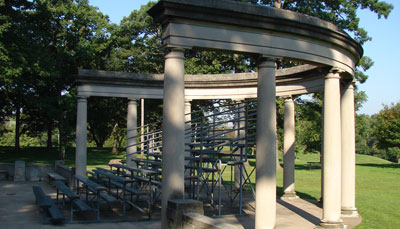 Rock Island residents commemorated Abraham Lincoln’s centennial birthday in 1909 by naming this park in his honor. This 22.75 acre woodland site, considered one of Rock Island’s beauty spots, was selected for its grandeur and views overlooking the Mississippi River valley. Lincoln Park was expected to someday blossom into Rock Island’s most popular park and picnic grounds.

One-third of the funds raised to purchase this site in the Brooks Addition were obtained by popular subscription; the rest was taken from the city treasury. In 1920, Augustana College offered to buy the raw land for expansion. There were no park benches, and the main geographic feature seemed to be a natural stagnant pond. The only improvement was a single light pole. Even Mayor Harry Shriver admitted he’d never been here. But citizens rose to oppose the sale, insisting that the park not only be saved, but improved.

Through 1920 and 1921 the issue to sell the park was debated. KeyStone founder E.H. Guyer stated, “Lincoln Park was acquired by popular subscription and in reality belongs to the people and any effort to deprive the people of it should be strenuously resisted.” The people prevailed.

The northern edge of the park is delineated by the Indian Boundary Line, which derived from an 1816 treaty with Illinois Native American tribes. The northwest corner of the park contains a bronze plaque on a pedestal commemorating this historic boundary, which was surveyed in this area by Flack and Bean in 1821. It was an arbitrary line across the state, beginning at the Mississippi river and extending east to near Chicago, where it took a sharp turn to the northeast, meeting Lake Michigan. Indians were forced to move north of the line, which was also intended to be the Wisconsin-Illinois border. Rock Island property abstracts still mention the Indian Boundary Line as a reference point.

During the 1920s, improvements were slowly made. Funds to build a fountain and band shell were a bequest from Naomi Davenport, who died in 1924. Miss Davenport also provided an endowment to provide free public concerts.

In 1928, Davenport landscape architect Russell L. McKown, who was also the nephew of Park Board President E.B. McKown, presented the board with long-range plans to develop and improve the park, including adding fill to provide flat spaces for playgrounds, tennis, horseshoes and croquet, and the two Davenport memorials. The required fill would not come from cutting down trees, but from another McKown proposal to grade a hill to create an outdoor amphitheater seating as many as 5000, on a long grassy slope. He also planned to convert the existing wading pool to a sand play area and use $10,000 that had been donated by Frederick C. Denkmann to build a new wading pool with dressing rooms. McKown included a rustic shelter with a connecting pergola. Finally, the plans called for a Davenport memorial fountain to be built within the next few years and, in the more distant future, a series of connecting pools forming rock and water gardens. McKown eventually served as a landscape supervisor for Civilian Conservation Corps projects at Mount Ranier National Park, worked at Yosemite National Park leading up to World War II, and served in World War II.

The ultimate development of Lincoln Park and its pool owe a great deal to the Great Depression and to Mrs. Frederick Denkmann. When her husband died, she upped his donation, offering to pay the full $45,000 cost of a more elegant wading pool as a memorial to him.

Architect Benjamin A. Horn was retained to design the elegant Bedford stone dressing room and shelter building. Beyond the 30 x 30 wading pool was a semicircular set of Greek columns called a peristyle. With its rounded arches topped by large scrolled keystones and the low relief carving above the flanking doors, this park building shows some influences from the Italian Renaissance style. The Denkmann Memorial Pool House was completed in 1930.

The fountain and band shell were finally completed in 1934, with most of the labor coming from otherwise jobless men, employed under federal programs. A sidewalk from the band shell to the pool was built, and the driveway through the park was lengthened. A year later, it was named Jackson Drive in honor of William Jackson who was known as the father of Rock Island Parks.

World War II had the country rationing coffee, sugar and chocolate in the 1940s. In the spirit of the war effort, families could supplement their food supplies with vegetables grown in “victory garden” plots in the park.

The Denkmann Memorial Pool was closed in the mid-1940s and the pool house sat unused. But that wouldn’t be the case for long. In 1964 Don Wooten saw the unused pool house as an opportunity, and claimed it as a permanent home for the Genesius Guild. Over the years, they’ve added a stage, lighting, sound amplification and comfortable seating for the audience. Plays and operas continue today, staged right in front of the former pool house.

By the 1980s, Lincoln Park was in need of rejuvenation. A $350,000 renovation, completed in June of 1986, saw the Davenport band shell and the Denkmann structure renovated. A gazebo was added to the park, surrounded by a “sensitivity garden” consisting of plants grown to be touched, and it became a popular spot for summer weddings. Sand volleyball courts were installed, tennis courts and softball diamonds were improved, and a new picnic shelter was added to augment the old shelter, which also received a facelift.