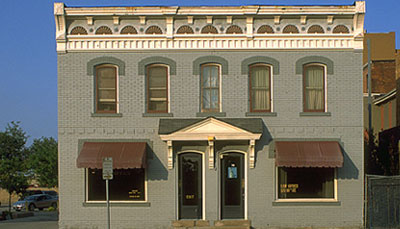 Constructed around 1880, this Italianate structure developed a distinctive history through the ownership of George “Crimps” Holsapple. The building became notorious as a house of prostitution, although Holsapple’s official title is listed as “bartender” in city newspapers. By 1922, Holsapple, a former lieutenant of crime kingpin John Looney’s, had become his enemy and rival. The rivalry culminated in a shootout in Market Square. Anthony Billburg, one of Looney’s chief foes, orchestrated an ambush with Holsapple and others. Twenty-one-year-old Connor Looney was killed. Nationally known attorney Clarence Darrow defended Billburg and Holsapple in 1923. However, Darrow could not prove Holsapple innocent. Two years later Darrow would become one of the legendary lawyers in the nation as he defended John Scopes, a high school teacher arrested for teaching evolution. “Crimps” and three others were convicted for the murder of Connor Looney and sentenced to 14 years in prison.

George and Mamie Holsapple owned the building until 1948 when it was closed by the State’s Attorney’s office. Since 1948 it has been used as an office, and was acquired by John Lewarne in 1981 after several years of vacancy

An elaborate cornice, with unusual shortened brackets and fancy elliptical fans cut into the wood are decorative details. The windows have hooded brick arches on the second story. The double doorway entrance is unique among other Rock Island buildings, and is decorated with corbel arches that support the porch.